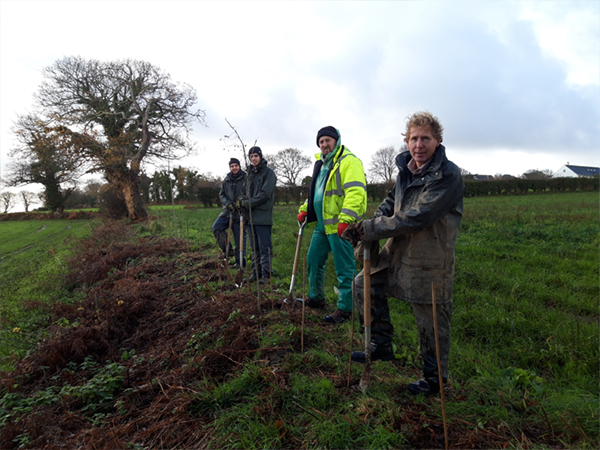 The National Trust for Jersey and The Jersey Royal Company set to deliver 10 Miles of Hedgerows in First Year.

In what is seen as the inaugural year, the National Trust for Jersey and The Jersey Royal Company have joined forces to plant hedgerow corridors throughout the Island.

Thousands of metres of hedging will be planted this winter and into the foreseeable future with the help of six of The Jersey Royal Company’s staff, supervised by project co-ordinator Conrad Evans from the Trust. Jersey Royal’s extensive tenancy portfolio has provided invaluable access to over 8,200 vergées of land, and Jersey Royal’s knowledge and contacts have been instrumental in securing permission from landowners to initiate the work.

The Trust has secured funding from the Roy Overland Charitable Trust, and a generous private benefactor. This funding will cover the cost of the plants, materials, the project co-ordinator and Jersey Royal staff.

The aim of this major landscape restoration project is to plant 10 miles (15km) of native species hedgerows between St Catherine’s Woods and Jersey Zoo in the first year. Involving a total of 20,000 whip sized plants, standard trees will also be included without compromising or impacting on modern farming practices. Biodegradable spiral guards are also being used to protect the plants from rabbits which will be harmlessly absorbed into the soil after 4 or 5 years.

Over 30 species of birds in the island rely on hedges for nesting and the RSPB reports that hedgerows support up to 80% of woodland birds, 50% of mammals and up to 30% of butterfly species. Hedgerows near ditches and streams also provide valuable habitat for amphibians. In terms of mitigating climate change, a well-managed 100m length of mature hedgerow has the potential to sequester or store up to 120kg of Co2 per year, contributing to the Island’s aim of becoming carbon neutral within the next 10 years.

Jersey’s rural landscape consists of small fields bordered by hedgerows but in some cases, these borders have been lost over time and the project will create valuable wildlife corridors, shelter belts and landscape enhancement through joined up and re-instated hedgerows.

National Trust for Jersey stated: With the support of The Jersey Royal Company, landowners and our generous funders, we have been able to initiate an immensely important hedgerow restoration project, which will secure enormous environmental benefits for the Island in the longer term. We hope to be able to further develop this initial pilot project in years to come so that the Island has a hedgerow network of which it can be duly proud and which will help safeguard our wildlife and rural landscape character.

Jersey Royal stated: The Jersey Royal Company is proud to partner this important initiative to develop networks of hedgerows in key locations across its farmed land mass. The company is committed to enhancing the Island’s natural environment and the hedgerow planting scheme helps in several ways by providing shelter for wildlife, providing wildlife corridors and sequestrating carbon. As a member of LEAF (Linking Environment and Farming) this project meets some of the principle requirements.

Can’t think what to buy for Christmas or birthdays? How about some hedge?

We are selling metres of hedge which we will plant for your loved ones which will help us reach our aim of planting 30 miles of new hedgerows around the island. Your ‘gift’ comes with a lovely card and envelope and it is £5 per metre, so you can buy one metre or as many as you like! Available to buy from 16 New Street on Thursdays from 4pm to 8pm and Saturdays from 10am until 4pm (until 2pm on Saturday 21st December). Also available from The Elms, St Mary or by post – please call 483193.