A pioneering conservation project has facilitated the return of Red-billed Choughs to Jersey’s North coast following local extinction over 100 years ago. 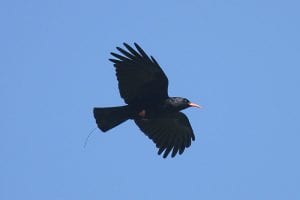 Project Information:
Birds on the Edge

The charismatic Red-billed Chough, with its striking long red bill and distinctive shrill call, feeds on insects in farmland, typically coexisting alongside grazing animals. Historically, Choughs inhabited several areas of Jersey’s coastline, however changing agricultural practices, especially the abandonment of marginal farmland, led to local extinction sometime around 1900. A similar pattern of local extinction was also recorded in all the other Channel Islands, with the last attempted breeding thought to have occurred in Guernsey in 1929.

The story of decline has been similar across the United Kingdom, and it is thought that there are currently less than 500 pairs of this rare bird in all of the UK and the Isle of Man. Today, the nearest Chough populations to Jersey are in Brittany, where there are around 50 pairs, Cornwall, where the species appears to be doing well since naturally re-colonising in 2001, and on the Gower Peninsula and Pembrokeshire in Wales.

Choughs feed mainly on maritime grassland throughout the breeding season and on dune grassland, winter stubbles and arable lands between summer and winter. The coastal grassland habitat that these birds require for feeding is maintained by wind exposure, salt deposition and sheep grazing. The Manx Loaghtan grazing project at Le Don Paton therefore provides ideal habitat for the Choughs. These iconic birds forage for invertebrate prey in areas of short turf and dung produced by the grazing sheep, and also use wool in nest building. Choughs likes to nest on sea cliffs but may at times use old buildings along the coast. Flocks can be seen wheeling over the sea, their high calls carrying on the wind, or probing the short turf for insects on the clifftops.

The best place to see Choughs in Jersey is on the North coast between Devil's Hole and Sorel Point.

Choughs reach sexual maturity sometime between 1-3 years, laying clutches of 3-5 eggs. Females incubate the eggs until they hatch at around 17-18 days after laying. Chicks stay in the nest for around 41 days before fledging. Choughs typically only raise one brood per year.

Through the Birds on the Edge project, a partnership between the Trust, the States of Jersey Department of Environment and Durrell, the Red-billed Chough is being reintroduced on Jersey’s North coast. In order to make this happen, several innovative conservation initiatives have had to be put in place. Among the most important of these include a captive breeding and release program, bracken management, the sowing of winter conservation bird crops and the reintroduction of traditional farming practices, especially the establishment of Jersey’s Conservation Grazing flock of Manx Loaghtan sheep.

Choughs have been re-introduced to Jersey’s north coast using birds reared at Durrell’s headquarters in Trinity and at Paradise Park in Cornwall. These birds have been released on Jersey’s north coast. All individuals within this small population have been ringed and also carry sophisticated electronics so that individuals can be identified and closely monitored. Tracking provides crucial information about the birds location and daily activities.