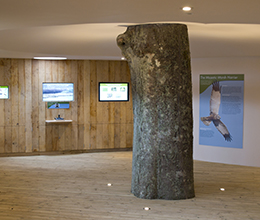 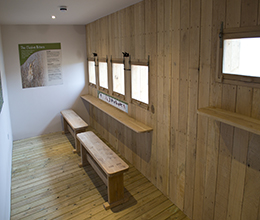 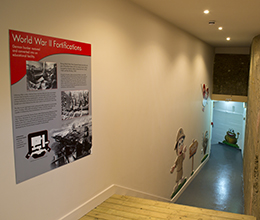 The newly opened visitor centre is accessed by a door that opens in to a tunnel through a dune mound. The tunnel then opens out to provide panoramic views of the reed bed and pond. The Wetland Centre’s 16 viewing windows afford truly incredible views of the reserve and its wildlife. The viewing windows are located at a range of different heights, offering adults, children and visitors with disabilities a unique perspective from which to bird watch without disturbing the resident waders and waterfowl. A green roof covers the whole facility, enabling the centre to blend in with its surroundings and providing important habitat for native wildlife.

In addition to the opportunities for birdwatching, the Wetland Centre also houses a range of interpretation panels and interactive exhibits, enabling visitors of all ages to learn all about wetlands as well as the diverse wildlife and human history of the La Mare au Seigneur SSI nature reserve. Particularly notable exhibits include:

One of the walls of the Wetland Centre has been specially constructed from recycled materials in order to provide nesting and roosting opportunities for birds such as Sand Martins, and bats such as Common Pipistrelles. The design and positioning of the wall followed a detailed analysis of the success of similar projects undertaken elsewhere in the UK and Europe. The design therefore takes in to account a number of important considerations such as minimising the risks posed to future residents by predators, disease, and human disturbance. A great deal of thought has also gone in to the positioning of this wall in order to ensure that it meets the target species requirements in terms of the provision of adjacent habitat and sources of food.

In addition to providing ideal nesting and roosting sites for the resident birds and bats, the wall will also give us humans the chance to learn more about the resident species. It is hoped that in the future we will be able to expand our live wildlife camera project to include the wall’s resident birds and bats. This will allow visitors to watch live footage of the wall’s residents on the Live Wildlife Camera Screen, and will enable The National Trust for Jersey Ranger team to monitor a wide range of important ecological parameters and observe interesting natural behaviour.

More information about the Bird and Bat wall, including the species that have taken up residence, can be found on a dedicated interpretation panel within the Wetland Centre.

A German personnel shelter constructed during WWII has been incorporated in to the Wetland Centre to provide space for a classroom. The conversion of the bunker from a disused WWII personnel shelter to an educational facility followed recommendations laid out in a detailed restoration specification developed by the Channel Islands Occupation Society (Jersey) Limited.

It is hoped that a large number of local and visiting students will benefit from the learning opportunities provided by the National Trust for Jersey’s programme of educational events over the coming years, many of which are due to be delivered within this newly restored facility.

More information about the history of the bunker can be found on a dedicated interpretation panel within the Wetland Centre.

Parking
Parking is located directly across the road from the Wetland Centre in the free public car park on La Grande Route des Mielles.