Wheelchair users may only be able to access the ground floor.

The property is located in the heart of St. Helier and just a short walk from Liberty Bus Station.

There is no parking available on site, but Sand Street Car Park is a short distance away.

To walk through the front door of 16 New Street is to step back in time and experience life in Regency Jersey. 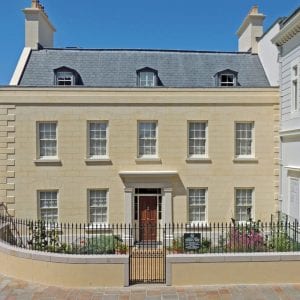 With evocative sounds and smells, you will be transported to a time of elegance when gentlemen smoked clay pipes, ladies drank priceless tea and the threat of French invasion was always a hot topic of conversation.

Meet the resident cook who is always keen to impart her recipes and tempt you with a taste.

Gifted to the Trust in 2003, having been neglected for a period of 20 years, 16 New Street has been meticulously repaired by the Trust in order to reinstate its elegant Georgian features.

16 New Street began its life as part of a speculative development initiated by the Durell family. With its fine panelled interiors and detailing, the house epitomised early Georgian taste. However, by 1812 architectural fashions had changed and the new owners of the house, the Journeaux family, initiated an extensive refurbishment programme to reflect the new Regency style. This involved the replacement of all the windows at the front of the house, along with window sills and door casings, the truncation of the roof, and the installation of a fine marble fire surround in the drawing room.

As a result of the bankruptcy of Phillipe Journeaux in 1850, the property was acquired by the firm of A. de Gruchy & Co. It then became a letting house before being taken on by the Liberty Gentlemen’s Club. The Club removed partitions on the first floor of the house in order to install their billiard tables. When the Liberty Gentlemen’s Club departed in 1909, the Jersey Young Men’s Christian Association (YMCA) moved in, removing further partition walls for their snooker and table tennis tables.

When the YMCA left in 1964, de Gruchy’s established their curtain and blind manufacturing workshop on the ground and first floors, using the top floor for storage. The workshop operated until the late 1970s when the building became a surplus storage area. For the next twenty years the house was neglected and gradually decayed until the parapet gutters gave way.

Threatened with demolition, Save Jersey’s Heritage, The National Trust for Jersey and the Department of Environment joined forces to find a long term sustainable future for the building.  Eventually, in December 2003, the Trust accepted the gift of 16 New Street with funds barely adequate for merely making the property wind and watertight. All was to change in 2004, when it became the recipient of a £1 million bequest from Mrs. Mollie Houston – funds enough to facilitate the complete repair of the house.

The house first opened its doors to the public in November 2011. Following a painstaking restoration by the Trust, 16 New Street has been described as "A lost jewel in the crown of the architectural heritage of Jersey"

The Story of 16 New Street

We invite you on a virtual ‘visit’ of 16 New Street, which was rescued from ruin by The National Trust for Jersey and meticulously repaired to reinstate its elegant Georgian features. Transport yourself to a time of elegance when gentlemen smoked clay pipes, ladies drank priceless tea and the threat of French invasion was always a hot topic of conversation.