Mourier Valley is an area of rugged beauty located on Jersey’s north coast. The valley itself is a small wooded area with a stream running through its centre ending in a waterfall into the sea. 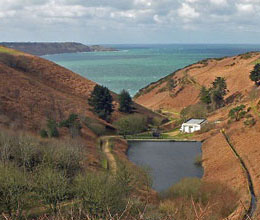 The valley epitomises the phrase ‘picture perfect’.  Such a beautiful coastal area is not just a haven for people to enjoy but is also home to a variety of wildlife including Warblers, Linnets, Shags and Gannets.

An unspoilt wooded valley with a bubbling stream, which in times past powered a number of mills, leads down to a reservoir and a small waterfall which cascades down to the sea below. On either side of the stream are grazed slopes and open grassland from which can be afforded stunning coastal views of Jersey’s north coast. On clear days you can also see the neighbouring islands across the water including Guernsey and Sark, as well as the offshore reef known as the Paternosters. For those keen to explore beyond the valley, winding footpaths lead to Devil's Hole, Grève de Lecq and Plémont to the west, whilst to the east you can head towards Sorel Point and Bonne Nuit.

In Spring Dartford Warblers and numerous other small bird species nest in the gorse. Peregrine Falcons, Ravens, and the occasional Lesser Whitethroat can also be seen flying gracefully between the headlands. Sea birds are also in abundance at this site, with great opportunities to see Gannets, Gulls, Fulmars and Shags. However, the most famous residents of the valley have to be the  multi-horned Manx loaghtan sheep and the characterful red-billed Choughs. The sheep were introduced nearly eight years ago as part of a conservation grazing scheme to improve the habitat and reduce the impact of bracken. After a number of years the grass sward began to return which enabled the re-introduction of the Chough after more than 100 years absence. This was part of a joint project known as Birds on the Edge between Durrell, the Department of the Environment and the National Trust to help safeguard Jersey's farmland and seabirds. At the moment approximately 17 Choughs are resident in the area, and are a wonderful sight to behold as they deftly fly above the cliffs enjoying the strong air currents.

Although large parts of Mourier Valley are in private ownership the Trust is fortunate to care for a number of areas known as Le Don Paton and Le Don Hodges, as well as Devil’s Hole which was gifted to the Trust by the Clarke family in 2006. The Trust also enjoys management partnerships with Jersey Water and St John’s Manor.

Parking
The well-maintained coastal footpath offers excellent access to the site from the nearby Sorel Point car park to the east, or from behind the Priory Pub at Devil’s Hole to the West.

MUST SEE Mourier Valley offers breathtaking vistas of Jersey’s North coast. Visitors may be lucky enough to spot the resident red-billed Choughs as they fly above the cliffs enjoying the strong air currents.