A slow but inexorable reduction in numbers has left the iconic Atlantic Puffin teetering on the brink of local extinction in Jersey. 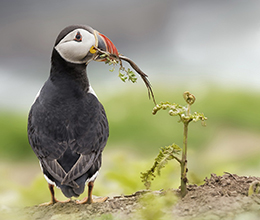 The Atlantic Puffin (Fratercula arctica) has always been an iconic bird in Jersey with its colourful and comical appearance, which has given it colloquial names such as ‘sea clown’ and ‘sea parrot’. However these names belie a tough species which spends most of its life braving all that the Atlantic Ocean can throw at it.

A very small number of puffins still breed on the north coast of the Island between Plémont and Grève de Lecq. Just before the Great War an estimated 300 pairs bred, but this number reduced rapidly in the following few years leaving only 20 pairs by 1920. Since then, a slow but inexorable reduction has brought them close to local extinction.

During the breeding season puffins there is a small chance of observing Puffins bobbing on the sea below the cliffs between Plémont and Grève de Lecq. They are surprisingly small birds and a pair of binoculars is essential if you want to spot them.

Puffins also have breeding colonies in the other Channel Islands including the small island of Burhou just off the coast of Alderney.

Adult birds return to their colonies in late March or early April, and where possible, excavate a nesting burrow into the soil. Sometimes they will make use of Manx shearwater or rabbit burrows, but where burrowing is not possible, the birds nest under boulders or in cracks and cavities in cliffs.

Puffins lay only a single egg in late April or early May. Both parents incubate it for 36-45 days, and they share the feeding duties until the chick is ready to fledge. The fledging period is very variable, ranging from 34 to 60 days, depending on the area and year.

Adult birds desert their young shortly before they are ready to leave the nest. The timing of the breeding in puffin colonies is highly synchronised, and so the departure of all adults takes place within a few days. The young birds leave their nest burrow and make their way to the sea, normally under cover of darkness to avoid predators.

The puffin is one of the commonest seabirds in northern Europe, with the largest breeding populations being found in Iceland and Norway. The British Isles accounts for 10% of the world’s population.

The main threat to puffins is the changes in distribution and numbers of small fish, while ground predators such as rats and domestic or feral cats can also have an adverse impact upon breeding colonies. Pollution is also a serious hazard and when oil leaked from the Torrey Canyon in 1967, it resulted in the loss of 85% of the French puffin population. Because of their low reproductive rate, puffins can take decades to recover from this kind of incident.

Because the puffin is so widespread, the only realistic conservation measures are sustainable exploitation of the seas, a reduction in incidence of marine pollution, and preventing ground predators reaching nesting colonies.